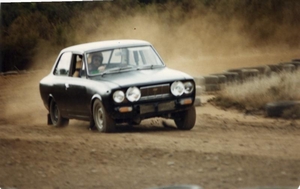 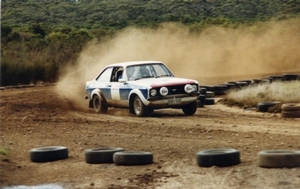 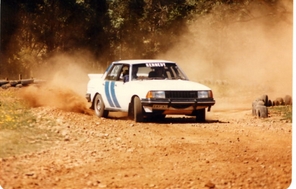 A Little Bit Of History
On a mission to find our phone modem to generate the code to access our banking things became dire and the study had to be searched. In a fit of domestic madness I decided to sort the boxes of crud to make a bit of space for next year’s rally and hopefully locate the matchbox sized missing electronic gizmo. What a bloody epic!

16 reflex boxes of no longer needed rally paperwork, 200+ event ID tags, and manuals from all over the damn world relegated to the recycle bin over the next 3 pick ups. During the epic sort a few little nuggets of Cerberus history were found and saw the light of day for the first time in 18+ years. Below are 2 examples of my finds.

i) 1981 Autosport Stages – VRC sup Regs- a Grade 3 “Special Stage Event” organised by
HMAS Cerberus Car Club. An event with Sponsors, Prize money (over $5500 cash and another $1500 + in Trophies and awards, Professionally Printed documents (pre Microsoft). In its day it was the profile event to run.

Just a few of the interesting things in it are:-
Asst Director Bob Whitworth – 28 years on he is still putting in and appearing in Cerberus Event Supp Regs!
Chief Scrutineer- Roger Baker. This proves that a White Maggot turns into a Radio Dweeb.

They had the Lakeland Hill Climb as a Special Stage (known as a Super Special Stage now days). All Cars had to have a roll bar, a “BCF fire extingisher (not dry powder) …” and an “adequate first aid kit”. 22 Stages, 190km’s in the Poweltown/ Noojee area, 8 Spec Points (4 with PA), Promotional Start in Chirnside Park, entry fee $68. There is not a rally in 2009 in Victoria that would come close to being as flash as this event was. Shows how far we have not progressed.

Check out a 1980 copy of the CCC In Gear Magazine

The Life of Paul Eccles

Well the last meeting was certainly an interesting one. There are certain things that happen in your life that become lasting memories and give you a great sense of achievement, being made a life member or Cerberus Car club is certainly one of them. I was deeply honoured and also lost for words to have been made life member of this great club.

Thank you to everyone behind the scenes that orchestrated this, it does mean a lot to me. There were many things that I should have said on the night but was a bit taken back by the moment. So I thought I would share with you how Cerberus Car Club has become a big part of my (or that should be our) life.

The usual path of growing up included motorbikes, watching car racing etc and once that piece of paper called a license was handed to me I was off street racing in a quick Holden powered 1965 Toyota Corona. I knew nothing about brake setups or suspension – as along as it was fast in a straight line and laid plenty of rubber I was happy. I was keen on rallying and always watched rallycross and sprint rally’s on TV and always thought I would love to try that but never knew how to get involved with rallying at that stage. Many other cars passed thru the garage, 308 powered Corona, 327 EH, 308 LJ numerous Chevs and Pontiacs.

I was building a MK1 Cortina with a 3” chop top, wheel tubs, 600hp 350 Chev (that’s without the nitrous) when we heard about these ¼ mile sprints being run on the navy base at Cerberus. Many of my mates raced this meet and it is interesting looking back at the photos. Parked in the pit area was all these rally cars and the bug bit. I made inquiries with a few of the drivers and this inevitably lead me to HMAS Cerberus Car Club. At the time I had a $50 180B to run around which became my first rally car complete with standard brakes and struts, air shockers and full interior. The one thing I love about this sport is the camaraderie, the willingness to offer help and advice and back then Dave Peters from CDP Industries was a big help. It wasn’t long before a cage was fitted to the Dato and I was entered in my first event which happened to be a HMAS Cerberus event, Round 1 of the 1985 TAUCC series.

Now back then I was told that they frowned upon Cerberus members entering their own events, unless they were chasing points but as I was a rally virgin it was OK, usually you helped out, a philosophy I still abide by. As with most first timers your first event is always memorable. My step father navigated for me and between the two us we knew nothing about rallying and with my mum as service crew we hit the forest.

We started second last car on the road and remember getting lost on the first transport stage great start! We finally made the start of the first stage and headed into the great unknown at full throttle; well as fast as a stock 180B with stock brakes and suspension could go. Without going on too much a couple of memorable things happened, 1) several ks in we came across a car just of the road, stop and helped them back on and let them go in front of us, 2) we kept coming across these boards with letters on them and at the end off the event we were asked if we had seen them, yes of course, didn’t know we were supposed to write what they were down on our time card (doh!). I think we finished 9th O/R. I soon had a 1600 in the garage and the fun began.

It wasn’t long before I was on the committee and running events, autoX’s, ¼ Mile sprints, social events and rallies. By then Mark and Rose had joined the club and had also been suckered onto the committee. Many nights were spent at their house typing the magazine, using a hand operated drum roller printy thing to produce the magazine and documentation for events. How things got easier when we got a photo copier, wow! (So stop your complaining PB). (Lucky this hasn’t been edited, from PB)

Thru those early years running events rotated between Mark, Rod and myself and with the usual band of merry helpers managed to run some good events. It was hard work but fun and rewarding. I have seen many, many members come and go and are privileged to still have many current members as my closest friends. So without rabbitting on too much more I would like to thank everyone for the honour bestowed upon me, thank you.